The process of drawing residents into districts for the purpose of electing someone to represent the area.

Redistricting occurs every ten years following the Census. The purpose of redistricting is to equal out the population of each district, a requirement handed down by the U.S. Supreme Court. The precedent has been shortened to “one person, one vote,” meaning each person is equally represented. This comes in the form of one representative representing roughly the same amount of residents (based on the office). Residents and voters are not interchangeable in this situation, even if only voters can vote on the representative. A district’s population is based on the Census count of each person who lives in that area–adults, children, documented, undocumented, registered voters, ineligible voters, incarcerated, etc.

Redistricting is a state issue. Each state has its own process and draws its maps. There are some Federal requirements, but the process is left up to the states for the most part. Reapportionment, however, is a national process that also aligns with the Census but is different from redistricting. Reapportionment is the process of dividing the 435 U.S. House of Representatives seats across the 50 states. Oklahoma has been allocated five representatives, meaning there are five congressional districts. 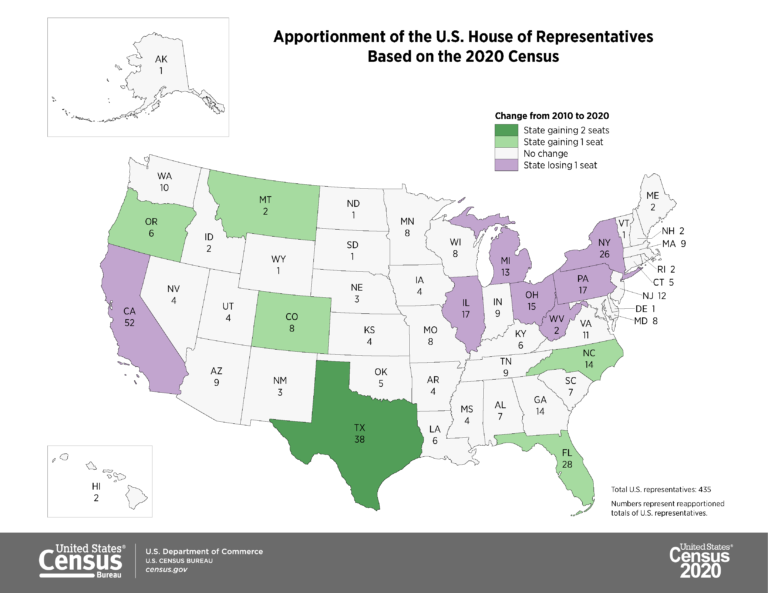 Map shows the results of reapportionment after the 2020 Census.

Districts are a group of residents banding together to elect someone to speak on their behalf. Who makes up that group decides on who is going to serve. The ideas and feelings of an individual are only part of the larger group. The collective opinions of the majority of voters in an election are what propel a representative into office. Consequently, the elected representative will decide on important federal, state, and local issues vital to everyone’s everyday life and rights. Oklahomans dedicated to birth control access may be loud on their own. Still, if they are not collectively strong in a district, their power to elect a representative with shared values is reduced.

The values drawn into a district are the values that will head to the Capitol to vote on laws that affect the whole country/state/county/city.

Districts nationwide are required to meet the following criteria:

Rules adopted by the Oklahoma Legislature

The Oklahoma Legislature is tasked with drawing the new boundaries for the U.S. Congress, State Senate, and State House districts. The process is somewhat murky.

As the public, we see the proposed maps pass through the Legislature like any other bill. A committee is created, the maps are introduced as bills, the bills weave between chambers and land on the Governor’s desk. Maps for the Legislature (State Senate and House) must be passed by the end of the session following a Census, or the process is turned over to a commission equally represented by Republicans and Democrats.

Historically, Oklahomans have not been able to participate in the process until this year. In 2020, the Legislature announced they would open the redistricting process to include input from the public. The redistricting committee set up town halls, posted material online, and allowed residents to submit maps.

Under the current redistricting process in Oklahoma, representatives choose who they represent, drastically diminishing the ability of voters to choose their representatives. The power to hand-select voters is entrenched in U.S. governance and has historically been abused, leading to gerrymandering. 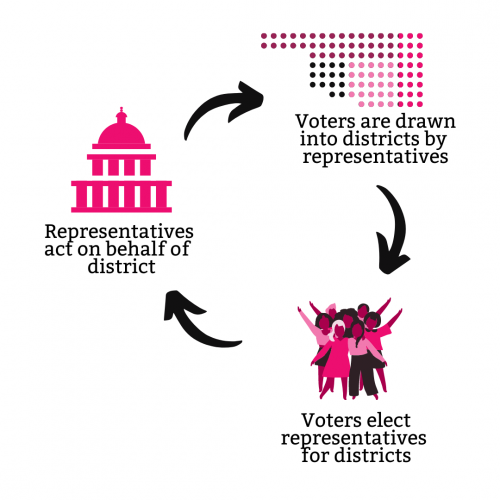 Gerrymandering, a term used to describe drawing districts to influence election outcomes, first popped into the political world in 1812. Typically, when “gerrymandering” makes its way into a headline, it’s not for a good reason. It’s most likely associated with an accusation that the party in power has proposed districts to increase their win rate. This practice is called partisan gerrymandering.

Partisan gerrymandering is done through two methods: packing and cracking. Packing is when voters from one party are squeezed into one district, removing their ability to sway the surrounding districts’ election results. Cracking, however, is the opposite. Voters from a party are split into surrounding districts to dilute their vote, making them a minority in each of those districts, so their voices won’t affect election outcomes.

Special Session & How We Got Here

Without the required information, the Legislature was in a bind. The constitutional deadline does not offer any slack due to extraordinary circumstances such as a worldwide pandemic delaying Census data. Meaning, if the Legislature didn’t pass maps, the process would be sent to a commission equally composed of Republicans and Democrats.

Republicans have supermajorities in the Legislature. If they voted as one block, there is little to nothing Democrats could do to stop them. So naturally, Legislature Republicans had no motivation to turn over their redistricting power to a commission where Democrats would have equal sway.

Maps were eventually revealed and introduced (HB 1198 and SB 1066) using American Community Survey (ACS) data. Although the Census Bureau issues ACS data, it is not the official 10-year Census data. The ACS maps were passed and signed by the Governor, averting the commission clause.

Beginning November 15, 2021, the Legislature will convene for a special session on redistricting. During this time, they will need to pass the congressional map and reassess the Legislature maps. Despite their confidence in the ACS data, the official Census data does not align. There are vast population discrepancies in several districts.

Oklahoma will have its new district lines by the end of the special session. Track the bills with us using the Metriarch Legislative Tracker. 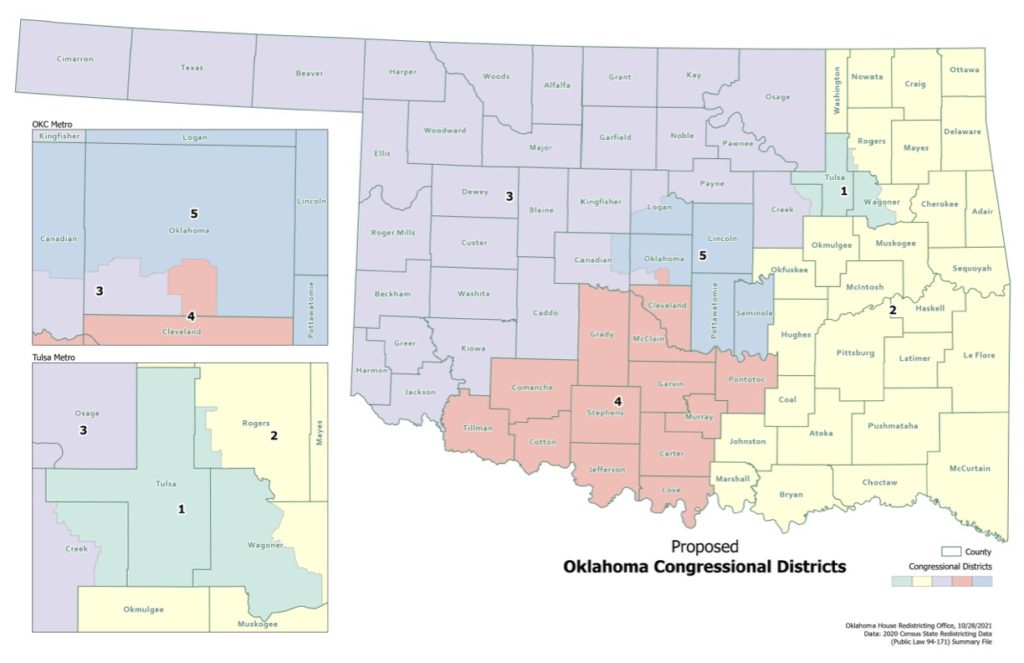 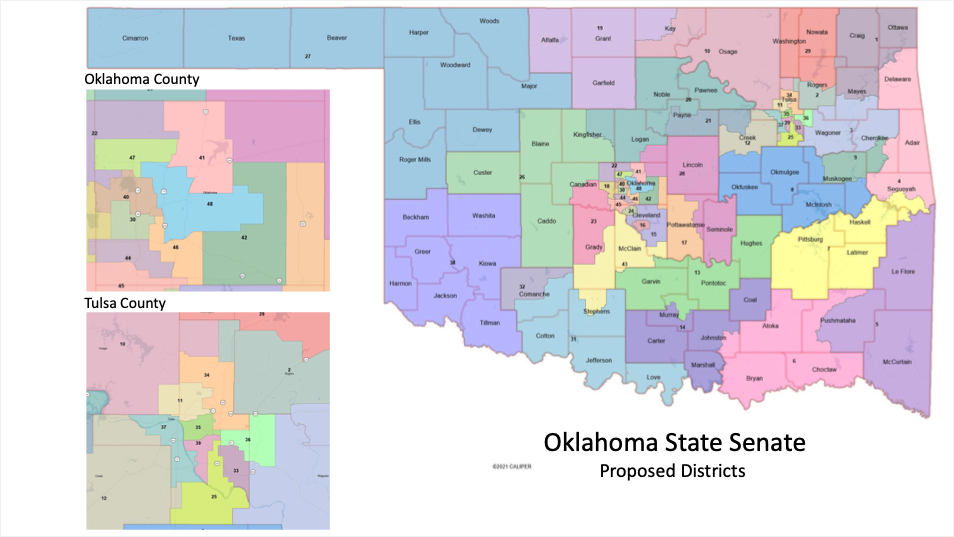 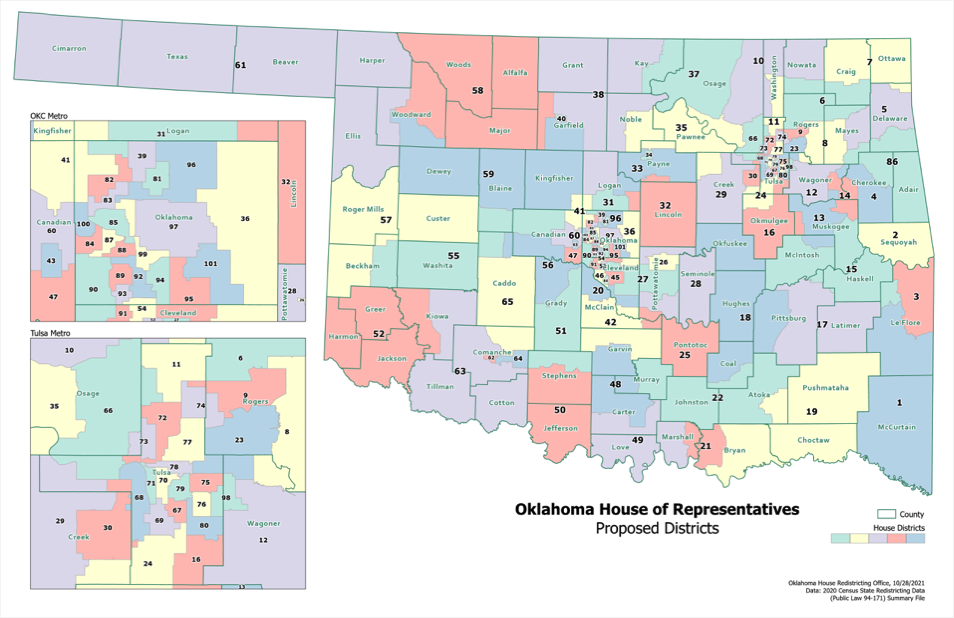 View the full data and demographic breakdown of the proposals

View the text of the bills proposing the maps

The maps released for the upcoming session have made small ripples, except for congressional district 5 (CD-5).

Under the proposal, CD-5 would represent Oklahoma City along with CD-3 and CD-4. The city’s representation has been split in the past, and the proposed maps continue this trend. The new boundaries are making news for one reason: partisan gerrymandering.

Former-Representative Kendra Horn, a Democrat, won CD-5 in 2018. Her victory was part of a national wave that gave Democrats the majority in the House of Representatives the following session. The district has been on watchlists as the population of Democratic voters has grown. As majorities in the House become narrower and narrower, the outcome and boundaries of districts like CD-5 have national importance.

Critics point to CD-5 as a textbook case of cracking. They claim that OKC is being unfairly pulled apart to dilute the Democratic-leaning voters in that area. The precision of mapmakers to carve out Democratic neighborhoods is hard to miss.

See this article from Oklahoma Watch

Oklahoma Legislators adopted the principle to keep like minded communities together. However, the proposed map places residents of the urban downtown OKC Plaza District in CD-3 with the much more rural residents of Guymon, 260 miles away. Other portions of OKC, the largest urban core in Oklahoma, are drawn into more rural, Republican districts. 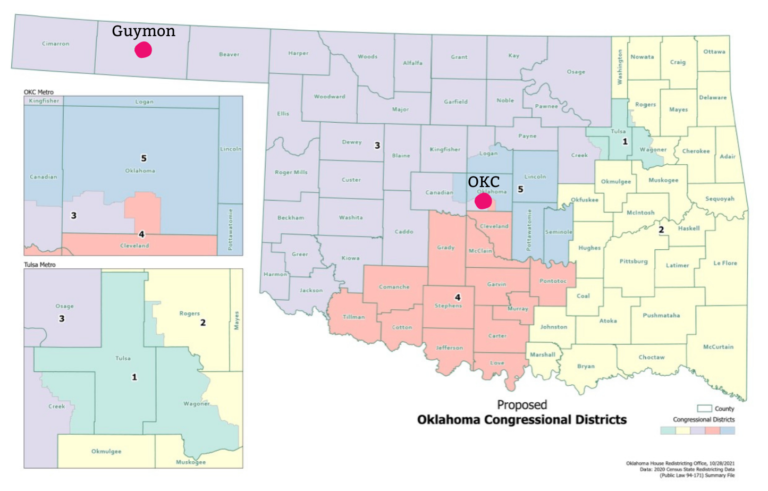 The map may also hurt OKC’s Hispanic population located on the southside. The proposed map places the heavily Hispanic area into CD-3, which extends to the panhandle. It is mainly white, rural, and conservative. Critics of the proposal worry that these voices will be diluted and lost in a district where they are grossly outnumbered. The boundaries and segmentation of OKC’s southside have generated questions surrounding the Voting Rights Act and whether the Hispanic community’s voice has been unjustly quieted.

Conversely, rural residents have their concerns with the proposed map as well. Under the plan, four of Oklahoma’s five congressional districts would capture urban areas (three in OKC and one in Tulsa). CD-3, 4, & 5 would cover large tracts of rural Oklahoma, but residents fear that the heart and priorities of the districts would be OKC. They may have a point. It’s not uncommon for representatives in the Oklahoma Legislature to represent large rural areas in their districts to live in the corner that touches an urbanized area.

Registration is now closed. If you would still like to attend, please contact Mindy Galoob at mindy@takecontrolok.org.